One of the strong relationships we have fostered within our community has been with Gordon the librarian on the library bus. Gordon arrives and parks outside the kindergarten every Thursday fortnight. This is a relationship that has been ongoing for several years now. We have seen the old original bus replaced by the smaller compact bus and share this service with local residents. Gordon happily sources books requested by kaiako and tamariki supporting current interests. Our tamariki enjoy this literacy language rich environment which fosters their love for stories and books.

Gordon is also a voluntary fire station officer in his spare time and has become a great resource with fire education. He has taken time to speak with tamariki about fire safety after fire drill practice and supplied us with a fire safety DVD and education resource materials for both whānau and tamariki.

Longer and warmer days have been welcomed. Our kindergarten gardens have burst into life and we have been busy planting many seeds. Growing seeds is an excellent way to learn about the life cycles of plants and how to nurture and grow these. Especially exciting is growing herbs and vegetables so we can enjoy cooking and eating these at kindergarten.

Summer is just around the corner and we are looking forward to the bounty of fruit, vegetables and sunflowers.

We all know how important it is to preserve our environment. The protection and preservation of native trees, insects and birds has been our focus for National Conservation Week this year. Kaiako Maree donated kōwhai seedlings for our whānau. These were readily received. The seedlings were a great means in developing more meaningful relationships and connections within our Manu community.

Our tamariki potted their seedlings and decorated their pots, incorporating literacy, creativity and empowerment of ownership of their seedlings. Wall displays featured native trees and bird resources, creating visual information for all to reference.

A spontaneous excursion was taken with tamariki walking around the neighbourhood to observe kōwhai trees in flower. This provided place based learning to explore and visualise, different sizes of trees as well as observe native kererū and tūī birds feeding off the nectar of the flowers. Later in the week when we went on Forest Friday several tamariki were pointing out kōwhai trees, tūī and kererū. This was evidence of learning being consolidated. And one morning Olive arrived at Manu excited as she had counted twelve kōwhai trees as her mum drove around the Crescent. This time the kōwhai were assisting in promoting numeracy learning opportunities.

A group of tamariki drew plans of bird houses and bug hotels and set about construction at the carpentry table. When their wonderful creations were completed these were proudly hung in the playground. Eagerly our tamariki have observed the birds and insect life. The seedlings, bug hotels and bird houses will be enjoyed for years to come.

Going plastic free for July made us reflect on how we could eliminate our single use plastic. We were inspired by one of our whānau to make wax wraps with our tamariki for wrapping their daily baking of buns.

Once again it’s been a busy and exciting time as we celebrate Puanga / Matariki here at Manu. The highlight for us is to celebrate the Māori New Year with a whānau day, this is when we share the kai we have grown, harvested and prepared. This year that included feijoa chutney, guava jelly, mandarin cake, coconut and curry pumpkin soup and lemon poppyseed muffins. Together with the kai shared by whānau this is a real feast and the day gives our whānau a relaxed environment to come together and foster relationships within our community.

We are grateful for the contributions whānau have made to the food bank as we reflect on the wider community.

Sustainability is an integral part of our practice and this has been woven through our learning from using wallpaper, lampshades, and tin cans in creative ways. We have made whetū/stars and manu tukutuku/kites from bamboo sourced at kindergarten. We decorated the nook as a night sky reflecting the stars of Puanga and Matariki which has been a fun place to be for sharing stories and games. Our bins for compost, paper and rubbish reflect this philosophy and we are using old paper to make recycled paper. Coffee grinds scatted in the garden help prepare the soil for planned future planting. Tamariki have represented their whānau by depicting them in drawings, leading onto screen printing for some and these are displayed for all to enjoy. Another focal point is the world map where the tamariki tīpuna / grandparents origins have been mapped, learning about whakapapa/genealogy. All of these contributing to a greater sense of belonging for all. 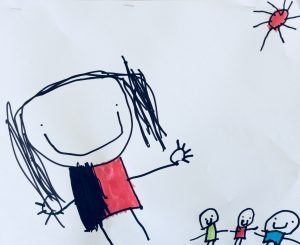 In conjunction with learning about Puanga/Matariki we visited the Govett-Brewster Art Gallery. Our adventure started by catching the city council bus. On arrival at the gallery we met with Chris Barry the classroom educator. Chris took us on a walk through the Len Lye exhibit to the Puanga/Matariki exhibit. Where we examined a sculpture created purely by crossing of sticks. Our tamariki then used ice block sticks to create stars using the same crossing technique in the sculpture. We moved to examine another sculpture created out of carved wood with Chris drawing our attention to the shapes in the design. This time our tamariki experimented with black painted plastic film and a nail to carve star patterns. These were best looked at by holding up to the lights. We then visited the gallery classroom where using clay everyone created their very own taonga pendant to take back to kindergarten to dry.

What a wonderful morning we had exploring the community, learning more about Puanga and Matariki, examining shapes and sculptures and fostering our creativity. 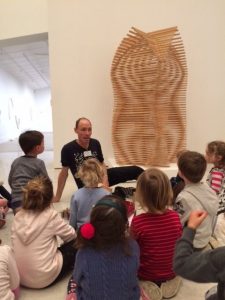 Visit to the Govett-Brewster Art Gallery

We all came together on Saturday 24 June to celebrate Puanga as a community. We had been very busy preparing Kai to share with our whānau including pumpkin soup, feijoa muffins and lemon star muffins. The children wove small whetū with wool and feathers and drew pictures of their whānau. We shared stories of Puanga/Matariki and represented the night sky in the reading nook. Thank you to all of you that donated food to our local food bank. We combined these celebrations with Manu’s 25 years of Early Childhood education, Manu opened in April 1992.

What a great way to end a busy term with Coach Mike’s play ball session down at New Plymouth Old Boys grounds. What fun it was learning to develop ball skills and working together as a team through games led by Coach Mike, Coach Hayden and Coach Dan.

Listening carefully for the word ‘Bottle of Potion’, controlling a ball using feet only, shooting hoops and goals, balancing a bean bag, practicing jumping with feet together, running, driving and catching hoops using skill and coordination.

Ka pai tō mahi Elliot. What did you enjoy most or would like to practice more?

For the remainder of Term 2 we will be celebrating Matariki/Puanga which indicates the change of season in particular winter.

Matariki is the name of the cluster of stars known as the Pleiades, but Puanga is the star that we see from the West Coast.

We are planning various activities to this special celebration that has become known as the Māori New Year. It is recognised as the time of harvest and the sharing of kai.

We would like to invite all whānau (Nana, Grandads, mums, dads, brothers and sisters who do not normally get to see the Kindergarten/Kura to come and experience some of the activities that the Kindergarten children do, and share some kai with us.

The children will be making soup during the week to share with you and we have been making feijoa muffins that have been frozen to bring out on the day.

A big thank you to Amelia’s mum, Caroline for helping us celebrate Amelia’s Indian heritage. We learnt that Amelia’s great great grandfather (Jivla Ravji)first came to New Zealand in 1919 and Amelia’s other great grandfather (Unkabhai Kanji Dhanjee) features in a book titled Indian Settlers:The story of a New Zealand South Asian Community by Jacqueline Leckie. We can only imagine how strange New Zealand must have been to them and the kind of adjustments they must have made.

Our celebrations involved traditional dress, music and food. We made daal and raita with the children and later Caroline showed us how to make roti bread. Caroline kindly contributed vegetable samosas, onion bhaji, bread balls filled with saag and gantiya ( a chick pea flour snack). Caroline’s friend Medla helped too and described growing up in England.

This was a great opportunity for the children to experience a culture that many would be unfamiliar with, the music, the tastes and the language to enrich their experiences of different cultures. It expresses to Amelia that the Indian part of her heritage is important to us as well and it is fun to celebrate it.