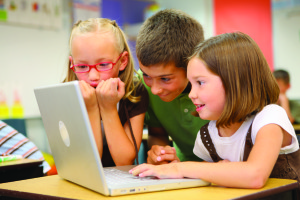 We deliberately do not have screens at Manu as we believe, strongly, that this is not the best way for young children to learn and, indeed, can be harmful to small children.  Computers are a valuable tool and can be a great source of information.  As teachers, we all use our computers to record children’s learning that has taken place at Kindergarten.

Small children need the opportunity to manipulate 3 dimensional objects, find solutions to concrete problems and have plenty of time available to communicate and form friendships. Research has shown that small children need gesture and interaction with an adult for language acquisition, not a cartoon character reciting nursery rhymes on a flat screen. When children play ‘real’ games they really learn about space and where they fit into it, they build strength and are active.

The physical harm, caused by children in front of screens for long periods of time, is damage to their growing eyes.  Short sightedness is on the rise and one of the reasons for this is that children are doing too much ‘near’ work, whether it is  on screen or the introduction of school type work too early. The young eye needs to be looking from  ‘far’ to ‘near’ in order for them to grow effectively instead of long periods of time with ‘near’ work.